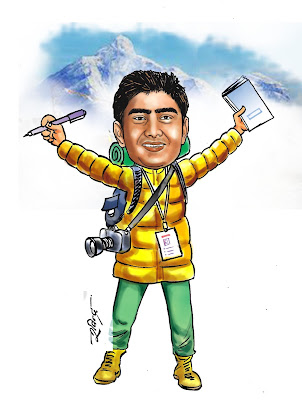 PRADEEP is a Kathmandu-based Nepali Journalist. He works as a correspondent/producer for BBC Nepali Service.

Previously he was with Nepal Magazine, country's largest selling news-magazine; serving first as a socio-political correspondent and later as the Digital Editor.

He has reported and published with The Washington Post, Asian Geographic, National Geographic, Pittsburg Post-Gazette, Buzzfeed News and The Diplomat (See stories).

He is the recipient of Nepal Magazine's extraordinary performance award for the year 2072 (2015-16).

He has dispatched his stories from the geographically tough Everest Base Camp (5364m) to the 2015 Earthquake-affected remote villages.

His co-directed documentary on a 75-year old woman, who lost her sight when she was nine and had been living on her own― Looking The Un-eyed Way was highly appreciated (Click here to watch).

He graduated with a Master's degree in International Relations and Diplomacy from Tribhuvan University, Nepal where his core areas of interest were International Migration, Soft Power, Public and Digital Diplomacy.


He was born and raised in Manigram, Rupandehi, a small town in Western Nepal.

He has started his writing from 'Wall Journal' in 2002.

He has served as an editor of USHA child magazine for three years (2060-2063 BS) and wrote the fortnightly Youth Column on Hello Shukrabar, a supplement in Kantipur, Nepal's largest selling daily (Sept 2009-Nov 2010).

Pradeep has traveled to India, Pakistan, Sri Lanka, Norway, Malaysia, China, United Kingdom and Turkey. He loves trekking and pushing himself for the adventure sports. To name few, he has trekked Gokyo trail, Everest Base Camp trail and did ultralight flight in Pokhara and Canyoning in Bhotekosi.
He has traveled a lot during his school years, changing a school almost every year, because of his father’s civil service.

There are lots of things that he does for fun― trekking, adventure sports, photography, blogging, watching movies, etc. are few to name. He speaks Nepali, English, Hindi, Bhojpuri and Urdu.

He loves receiving your emails pdp@pradeepbasyal.com.np OR (if it's fully official) pradeep.bashyal@bbc.co.uk.