Crunching all that data [Interview]

Bhupendra Khanal, 31, is the CEO and Co-founder of Simplify360, a Social Media Intelligence company based in Bangalore, India. He has also co-authored a book ‘Demystifying Twitter Marketing’. In a skype interview with The Post's Pradeep Bashyal he talks about the future of social media in Nepal. 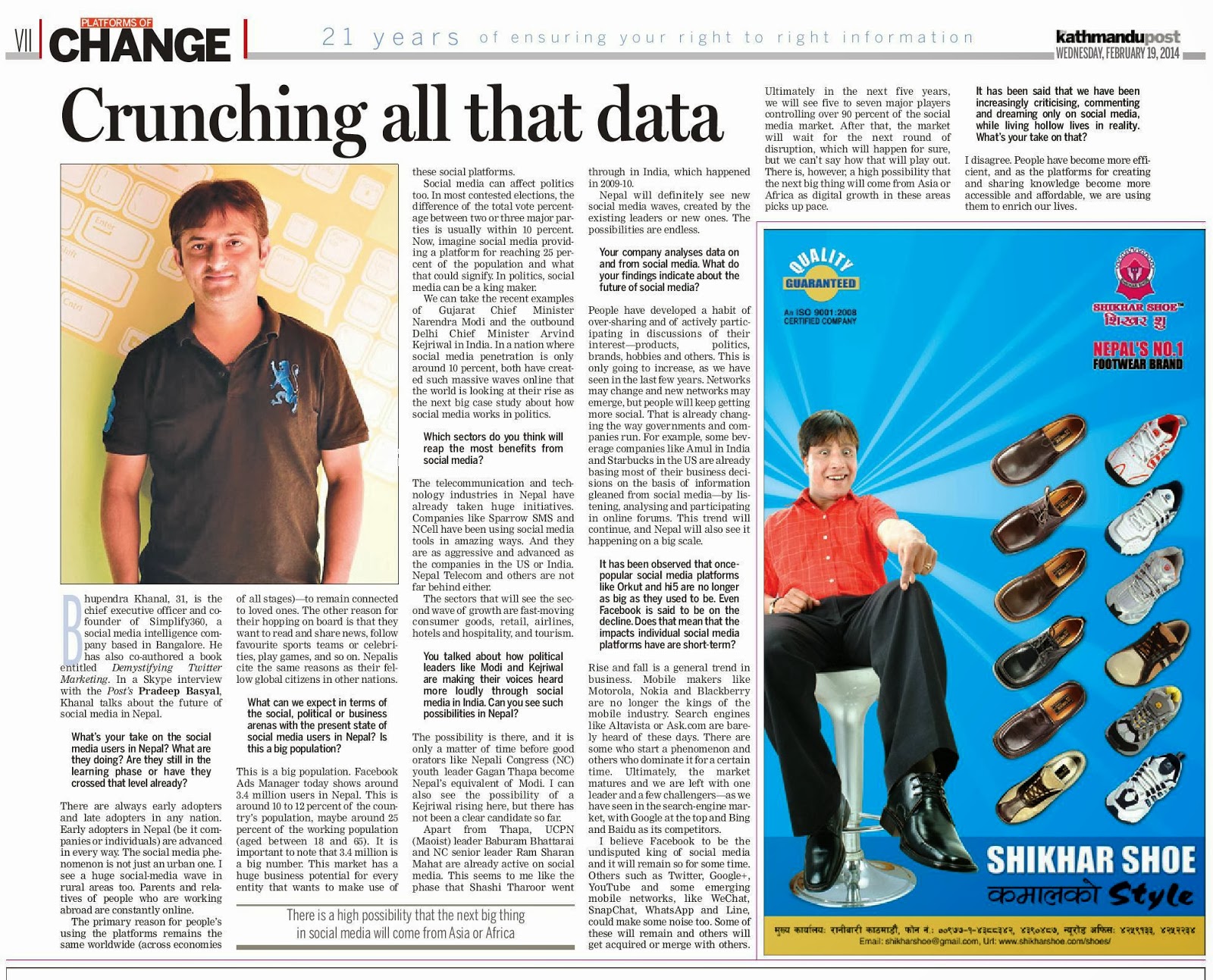 What's your take on the social media users in Nepal? What are they doing? Are they still in the learning phase or crossed that level already?

Not only in urban areas, but I see a huge rural social media wave too. Parents and relatives of people who are working outside are constantly using social media (through web or mobile) to remain connected to the external world.

The use case primarily remains the same worldwide (economies of all stages) – remain connected to the loved ones. Other major use cases are reading and sharing news, following favorite sports team or a celebrity, playing games etc. Nepal has almost the same phenomena as other nations.

What can we expect in terms of the Social, politics or business with the present state of social media users in Nepal? Is this a big population?

[Bhupendra] This is a big population. Facebook Ads Manager today shows around 3.4 million users in Nepal. This is around 10 to 12 percent of population, may be around 25% of non-dependent population (age between 18 and 65).

It is important to note that 3.4 million is a big population, which is around 70% of the population of Denmark or Norway. This has huge business potential and an amazing reach for enterprises or governments.

The other important thing is - in most of the contested elections, the difference of total votes percentage between 2 or 3 major parties is within 10%. Now consider Social Media giving potential reach to 25% of the population and its significance. It clear is a king maker in Politics.

We can take some example from Narendra Modi and Arvind Kejriwal in India. In a nation where Social Media penetration is around 10%, both of them have created the massive wave for themselves that World is looking it as the next big case studies.

What sectors do you think will reap the most benefits from social media?

[Bhupendra] Telecom and Technology industries have already taken huge initiatives. Companies like SparrowSMS and NCell has been using in amazing ways, and it is as aggressive and advanced as companies in US or India. Nepal Telecom and others are coming up.

The sectors that will see second wave of growth are FMCG, Retail, Airlines, Hotels & Hospitality, and Tourism.

You talked about how political leaders like Modi and Kejriwal are making their voices loudly through social media in India. Can you see such possibilities in Nepal?

[Bhupendra] It is there and it is one a matter of time when good orators like Gagan Thapa will pop up and become Nepal’s equivalent to Narendra Modi. I can also see the possibility of a Kejriwal coming in Nepal as there has not been any clear winner so far.

There is politician wave in Nepal. Gagan Thapa, Baburam Bhattarai and Ram Sharan Mahat are seen using Social Media actively. This seems to me like the phase of Shashi Tharoor in India, which happened in 2009-10.

Nepal will definitely see new social media waves, created by the existing leaders or new ones. The possibilities are endless.

Your company analyses the data from on and from Social Media. What do your finding indicate about the future of social media ?

[Bhupendra] People have developed a habit of over sharing and they are actively participating in discussions of their interest – this can be products, politics, brands, hobbies etc. This is only going to go up as we have seen in last few years. Networks may change and new networks emerge, but people will keep being more social. This is already driving the way governments and companies are running.

Some companies like Amul in India and Starbucks in US are driving most of their business decisions through social media listening and analysis, and community participation. This trend will go up and Nepal will also see most of it happening in big way.

[Bhupendra] This is a general trend in business. First Mobile makers like Motorola, Nokia or Blackberry are no more the king. First Search Engine makers like Altavista or Ask.com are hardly heard. There are some who start and others who dominate for certain time. Ultimately market matures with one leader and few challengers as we have seen in Google (with Bing and Baidu) for Search.

I believe Facebook is the undisputed king of Social Media and it will remain so for some time now. Twitter, Google Plus, Youtube and some emerging Mobile Networks like WeChat, SnapChat, WhatsApp and Line will make some good mark. Some of these will remain and others get acquired or merged. Ultimately in next 5 years, we will see 5 to 7 major players controlling over 90% of the market. Post that market will wait for next round of disruption, which will happen but can’t say how and by whom.

There is every possibility that next big thing will come from Asia or Africa, as the digital growth in those areas go up.

It has been said that we have been learning increasingly criticizing, commenting and dreaming only in social media, while living hollow lives in reality. What's your take on that ?

[Bhupendra] I disagree. Reality is that people are become more efficient as the knowledge and platforms become accessible and affordable. Competition has thus increased.

In Bangalore, thousands of companies are born in every year. Hundreds of products launched and millions of clients served. Few make it to the top and thousands die. Market has become ruthless and efficient. I do not believe even the death of companies is because of inactivity or time wastage; most of it happens because of wrongly placed vision, no vision or increasing competition.

This trend is coming up in Kathmandu too. People actually dream less these days. They think, learn from open information libraries (like Wikipedia) or from friends (in person or through web channels), discuss online and offline, build prototypes, and start marketing or hunting capital.

Take example of 11Beep, first major Social Network from Nepal. They have been doing amazing PR and marketing before even the product is released.

We live in the World of action. If someone sees inaction in it, that’s a much bigger threat for his business. It just shows he is outside of the loop and far from reality.


An edited version of this interview has appeared in The Kathmandu Post.
written by Admin at 10:42 AM