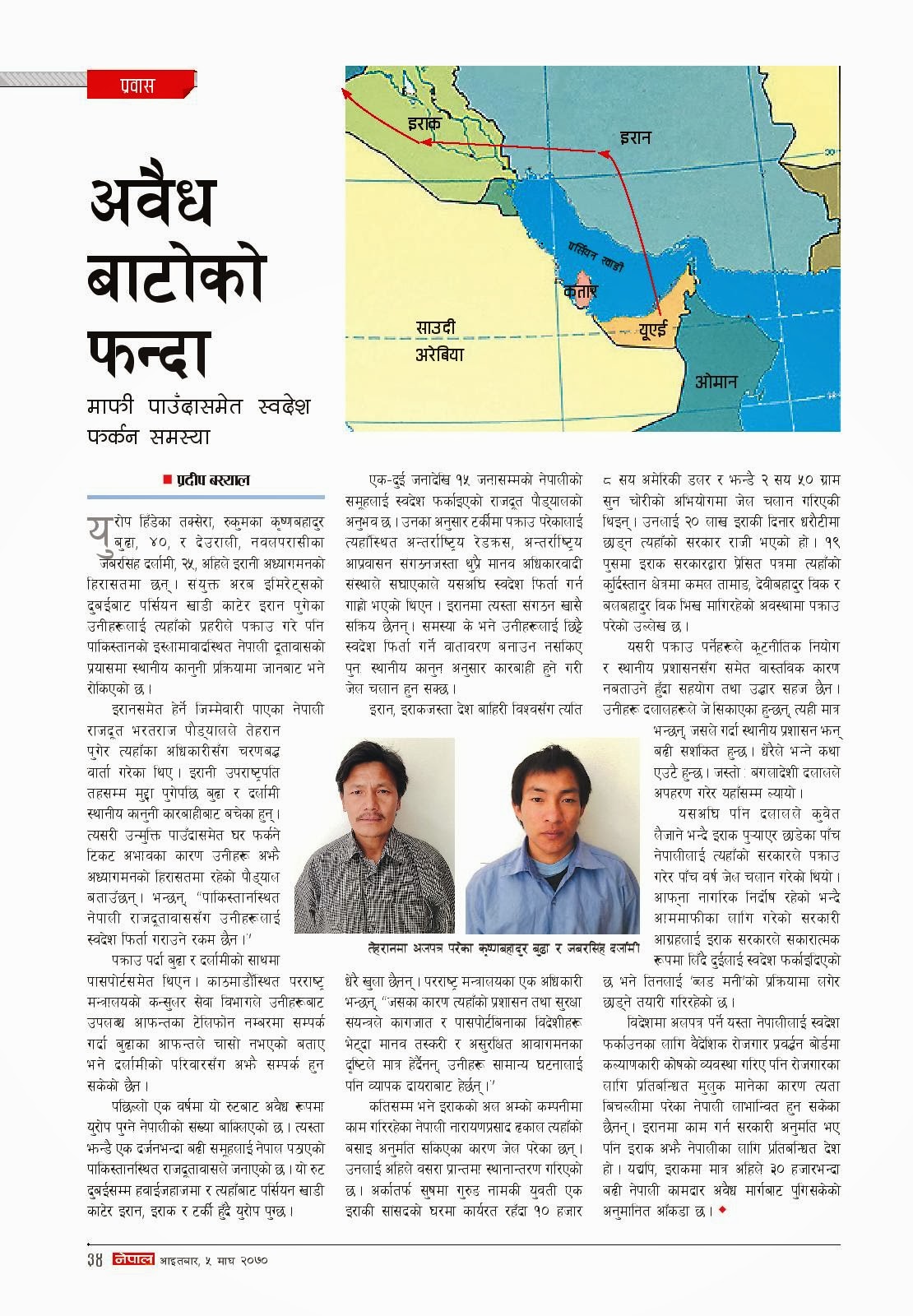 Forty-year-old Krishna Bahadur Budha of Rukum and Jabar Singh Darlami, 25, of Nawalparasi had never met each other before in Nepal. They were both caught without passports by immigration in Iran as they were trying to make their way into Europe. Their case would have languished in the local courts had Nepal’s ambassador to Pakistan Bharat Raj Poudel not intervened. Poudel, who is also in charge of Nepali affairs in Iran, took their case up to Iran’s vice president and the two men were pardoned. Although they are technically free to go, Budha and Darlami can’t go back to Nepal because they don’t have money to buy a ticket.

Budha and Darlami are not the only ones taking the backdoor to Europe. A new route for human trafficking has hundreds of Nepalis flying to the United Arab Emirates, crossing the Persian Gulf, and then going over land via Iraq and Turkey over to Europe. In the past year, Poudel says his embassy managed to return home dozens of Nepalis, sometimes in groups as large as 15.

Migrants caught in Turkey are usually handled by the International Red Cross, International Migrants’ Alliance, and other human rights organisations and eventually sent back. Since these organisations aren’t as active in Iran, it is difficult for those caught to make a case. And if the guilty parties cannot convince authorities that they have the means to return immediately, they are treated as ordinary criminals by Iran’s courts.

According to an official at the Ministry of Foreign Affairs, countries like Iran and Iraq are not as open to other countries and their administration tends to treat those without papers on par with local criminals, instead of considering them victims of human trafficking.

Narayan Prasad Dhakal was working for the Al Amco company in Iraq when his visa expired and authorities put him in jail in Basra. Sushma Gurung was caught, accused of stealing $10,800 and 250 grams of gold from her Iraqi MP employer. The government stipulated a Rs 170,000 bail on her and she is still in custody. According to a statement released by the Iraqi government on 3 January, three Nepalis - Kamal Tamang, Devi Bahadur BK, and Bal Bahadur - were caught begging in the country’s northern Kurdistan province. Because the migrants do not reveal the actual reason why they are caught, getting them to return home is harder. They always repeat what their agents have taught them, that they were ‘kidnapped and sent here by a Bangladeshi agent’, which makes authorities even more suspicious.

Earlier in 2013, five Nepalis were caught in Iraq after an agent convinced them he was sending them to Kuwait. They were given five-year sentences. After Nepal requested Iraq that they were innocent, the government decided to let two of them go free. The other three are caught in a blood money scheme, rescue from which is made near impossible by Sharia law.


Krishna Bahadur Budha, 41, who worked as a labourer in Dubai, was trafficked by agents on the promise of sending him to Greece. After he returned, he tells the story.

Five years ago I left for Dubai to work in construction. The little savings I could manage from my salary of 800 Dirhams per month went into paying for my wife’s uterus cancer treatment back in Nepal. She died while I was still abroad. When my three-year contract ended and my visa expired, I didn’t return home because I was knee deep in debt. 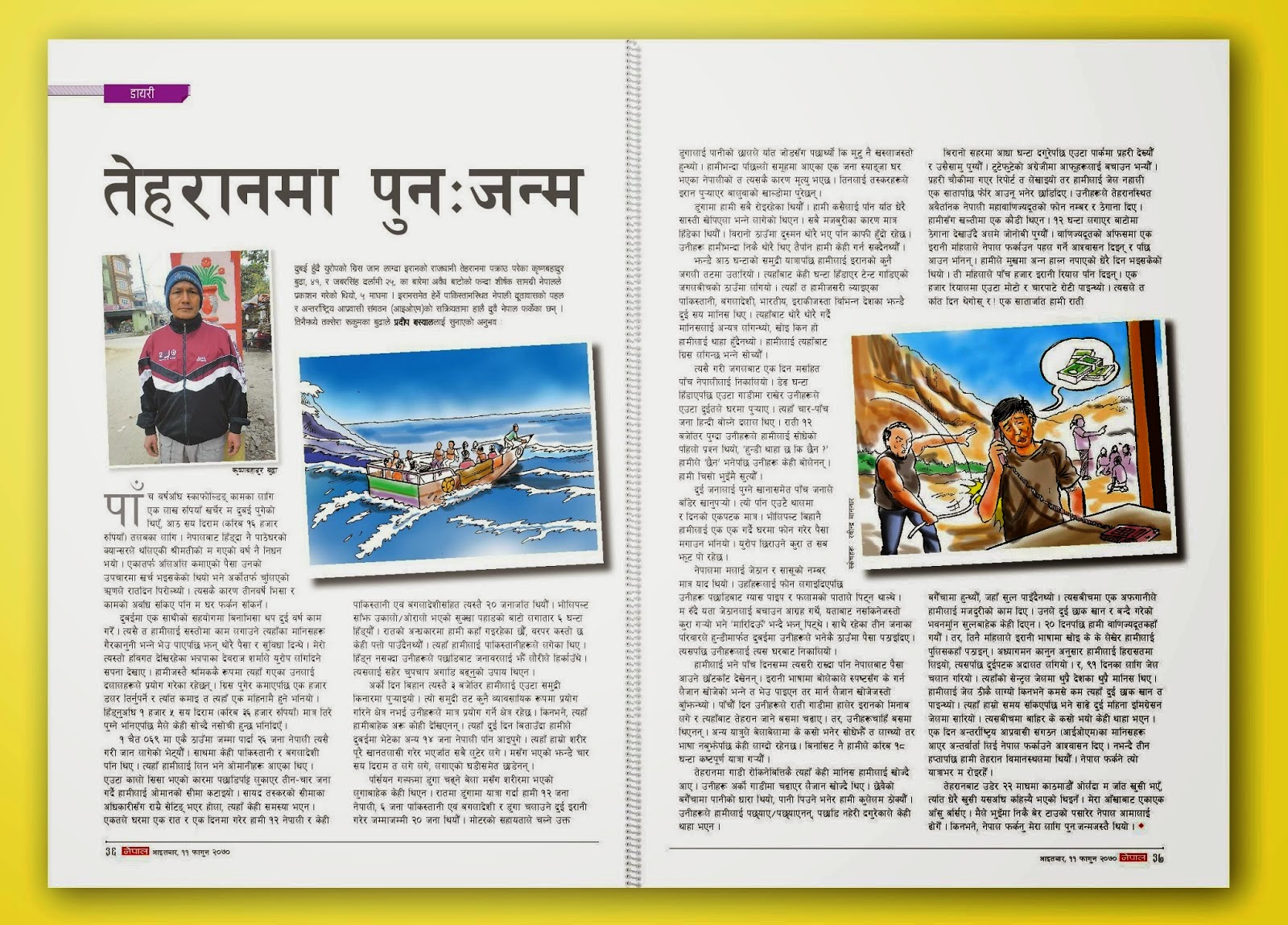 Although I managed to find illegal work in Dubai, my employer knew how desperate I was and squeezed every penny out of my pay-checks. A friend told me about paying 1,500 Dirhams up front to go to Greece. I would need to pay $1,000 once I got there, but that was no big deal because he told me I could make that much in a month.

Departure was fixed for 15 March 2013. There were other people, including 26 Nepalis and others from Pakistan and Bangladesh, who had signed up for the journey. From Dubai, we were taken to Oman on the back of a car. After resting for a night, we spent the next day walking over dry, rugged landscape and reached a private beach the next morning. We spent two days here waiting for the others to join us. When they did, we were all lined up, searched thoroughly and robbed of all our belongings. I lost 400 Dirhams and a watch.

From there we boarded a motorboat to cross the Persian Gulf. The ride was rough and I felt my heart jumping every time the boat rocked. Later we learnt that a man from Syangja died of heart complications on the next boat. The smugglers buried him in the sand once we got ashore to Iran after eight hours.

When we reached a camp in the middle of a jungle, we met 200 others like us. Nepalis, Indians, Pakistanis, Bangladeshis, Iraqis, you name it. Some of us were taken away once in a while, we couldn’t imagine why.

One day five Nepalis, including me, were moved to a two-storey house at midnight. Five of us shared what was only enough for two people to eat. The following morning, they cornered us and told each of us to call home for money. That’s when we found we were duped and we would never reach Europe.

I only knew my in-laws’ number in Nepal. My captors found out I couldn’t get money off of them and they beat me with a gas pipte. As I was crying to my brother-in-law, asking him to save my life, the smugglers looked like they were running out of patience. Three Nepalis who actually got their families to send money to an account in Dubai were let go.

We couldn’t understand what they were saying, but judging by their body language I understood they wanted to get rid of me and Jabar Singh Darlami, the remaining two Nepalis. Five days later we were driven in a red van to Minab and put on a bus to Tehran. After spending 18 hours on the floor of a bus we reached Tehran. There we were about to be picked by the smugglers’ contacts.

As they tried to force us into a van, we noticed a tap in a nearby garden. We told those men we were thirsty and sped off without looking back. After half an hour of running through this strange city, we saw a policeman at a park and tried to talk to him in our broken English. He took us to a police station and filed a report, and told us to come back in a week instead of putting us in prison. In the meantime, he gave us the phone number and address of Nepal’s honorary ambassador in Tehran. and advised us to seek its counsel.

When we reached the office twelve hours later, a woman told us she would help us return home and told us to return some days later. She gave us 5,000 Rial for food but that didn’t last very long because one roti cost 1,000 Rial.

We slept in a park for a week until we were told it was illegal to do so. An Afghani man found us loitering and employed us at his construction site, paying us in meals and sleeping quarters.

Twenty days later when we went back to the honorary embassy, the woman gave us a written note in Persian and told us to take it to the police. We were arrested upon arrival, tried twice, and jailed for 91 days because we had broken immigration laws. Which wasn’t so bad because we had two square meals a day.

Three months later, they shifted us to immigration jail because we had overrun our initial sentence and still didn’t hve the means to go back to Nepal. Isolated in prison, we didn’t know what went on outside.

One day some people from an international organization came and took our interview, and told us they would help us return home. And would you know it, three weeks later Jabar and I were standing at Tehran airport. I cried throughout the flight home, blessed with my new lease of life.