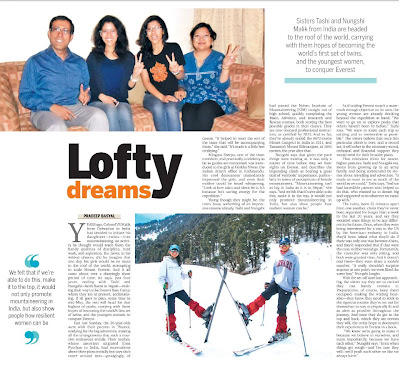 Years ago, Col VS Malik from Dehradun in India had decided to initiate his daughters—twins—into mountaineering, an activity he thought would teach them the handy qualities of discipline, hard work, and aspiration. But never, in his wildest dreams, did he imagine that one day, his girls would be en route to the roof of the world, attempting to scale Mount Everest. And it all came about over a dizzyingly short period of time, he says, just four years, ending with Tashi and Nungshi—both fluent in Nepali—making their way to the Everest Base Camp, where they are at present, acclimatising. If all goes to plan, some time in mid-May, the two will head for that highest of peaks, carrying with them hopes of becoming the world’s first set of twins, and the youngest women, to conquer Everest.


Just last Sunday, the 20-year-olds were with their parents in Thamel, readying for the big adventure, making all the arrangements that such a massive endeavour entails. Their mother, whose ancestors migrated from Pyuthan to India, had reservations about their plans initially but says she’s come around now—grudgingly, of course. “It helped to meet the rest of the team that will be accompanying them,” she said. “It’s made it a little less terrifying.”


Mingma Sherpa, one of the team members, and practically a celebrity as far as guides are concerned, was introduced to the girls at Gorkha Niwas, the Indian Army’s office in Kathmandu. His cool demeanour immediately impressed the girls, and even their mother could be heard whispering, “Look at how calm and silent he is. It’s because he’s saving energy for the expedition.”


Young though they might be, the twins boast something of an impressive resume already. Tashi and Nungshi had joined the Nehru Institute of Mountaineering (NIM) straight out of high school, quickly completing the Basic, Advance, and Research and Rescue courses, both scoring the best possible grades in their classes. They are now licensed professional instructors, as certified by NIM. And so far, they’ve already scaled the 6672-metre Mount Gangotri in India in 2011, and Tanzania’s Mount Kilimanjaro, at 5895 metres, the year after that.
Nungshi says that given the pace things were moving at, it was only a matter of time before they set their sights on Everest, and describes the impending climb as bearing a great deal of ‘symbolic’ importance, particularly in terms of perceptions of female mountaineers. “Mountaineering isn’t as big in India as it is in Nepal,” she says. “And we felt that if we’re able to do this, make it to the top, it would not only promote mountaineering in India, but also show people how resilient women can be.”

As if scaling Everest wasn’t a mammoth enough objective on its own, the young women are already thinking beyond the expedition at hand. “We want to go on to explore peaks that others haven’t been to before,” Tashi says. “We want to make each trip as exciting and as memorable as possible.” The sisters believe that once this particular climb is over, and a record set, it will usher in the necessary moral, technical and financial support they would need for their broader plans.


That relentless thirst for newer, higher pastures, Tashi and Nungshi say, stems from growing up in an army family, and being surrounded by stories about travelling and adventure. “It made us want to see as much of the world as we could,” Tashi says. “And we had incredible parents who helped us do that, who wanted us to dream big and supported us in whatever we came up with.”

The twins, born 25 minutes apart from one another, claim they’ve never been separated for longer than a week in the last 20 years, and say they wouldn’t want things to be any different in the future. Once, when they were being interviewed for a visa to the US by the American embassy in India, they’d been asked what they’d do if there was only one visa between them, and they’d responded that if that were the case, neither would go. Fortunately, the councilor was only joking, and both were granted visas. And it doesn’t end there—they even share a mobile number. “It really shouldn’t surprise anyone; at one point, we even liked the same boy,” Nungshi laughs.


With the set-off date fast approaching, the sisters say they are so excited they can barely contain it. Preparations, of course, keep them occupied, making the waiting bearable—they know they need to stick to the rigorous routine they’ve set out for themselves to stay as physically fit and as alert as possible throughout the journey. And once they do get to the top and back, which they are certain they will, the twins hope to document their experiences in Everest in a book.


“We know we’re going to make it because we believe in ourselves, and more importantly, because we have each other,” Nungshi says. “Even when things get rough—and I’m sure they will—we’ll push each other on like we always have.”

First appeared in The Kathmandu Post
written by Admin at 11:36 PM