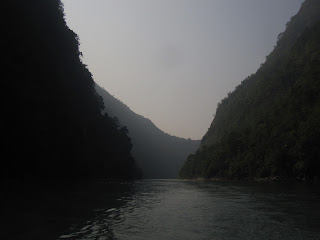 Laxman Neupane, a local resident of Arbeni VDC in Gulmi district, says he had not imagined that his village would ever have an easy access to transportation.But time has changed and his village too. The Kaligandaki ‘A’ Hydropower Project’s dam that turned a portion of river into lake has made transportation through the streamer boat possible.
Streamers ply between the 7.5 km distance from Aadimuhan of Syangja to Sedibeni of Gulmi, benefiting people of more than 30 VDCs of Syangja, Gulmi, Baglung and Parbat districts. “It has shortened the whole day time into less then an hour to reach Mirmee, where we can find buses and jeep to other places,” says Tolamaya Pandey of Nibuwakhar VDC of Syangja. 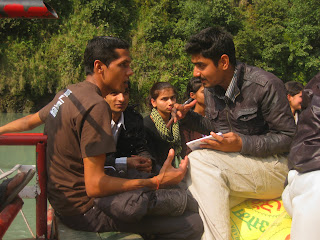 Sedibeni, which had no market until a couple of years ago, has now seen the light of day as small market area is being set up around the river bank, also regarded as a religious site famous for saligram (granite rock). The development was made possible due to low transportation fare charged by streamers. While it would cost at least eight rupees to transport one kg good earlier using human labour, streamers carry goods for just 50 paisa per kg. 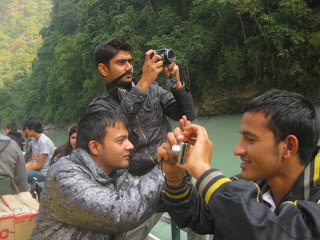 Twelve streamers that are under operation carry 50 to 60 passengers at a time. Around 100 locals are employed in the streamer business run under a local committee.
President of Shree Shila Shalikram Kaligandaki Water Transportation Committee, Chandra Bahadur Rana, spotlights the streamer’s efforts on social service as well. “Streamer boat has been fruitful at difficult times when there are cases like delivery and emergency rescue after accident,” he says. 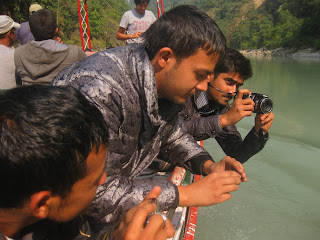 A streamer is locally manufactured at Andhimuhan by fitting the diesel engines of old vehicles. As it is a vehicle that safely sails on water, streamer is also considered reliable from the safety point of view. “The vehicle just sails on water and remains stationery if there is an engine failure,” says Rana.
This appeared in The Kathmandu Post, dated 29th Nov, 2011
Photos: Pradeep, Kumar, Ankit & Mani