By ANKIT ADHIKARI & PRADEEP BASHYAL
"If you want to be a bird, Why don’t you try a little flying?" sang the Holy Modal Rounders in the soundtrack to the epic hippie movie Easy Rider in 1969.  If the movie had been well ahead of the then-established benchmark in terms of counter-cultural statements, the song took things even further than that. 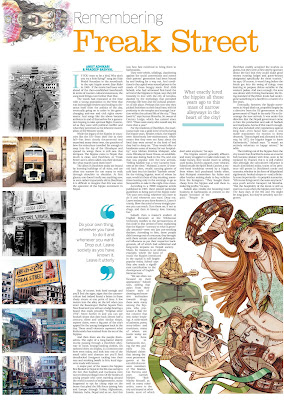 The words had resonated at the time with a young population in the West that was increasingly restless and looking to distance itself from the politics of the day, eventually going on to usher in the game-changing anti-war and civil rights movements. And songs like the above became anthems in and of themselves for a generation hoping to take spiritual flight, frustrated as they were with political conflict and what they perceived as the inherent materialism of the Western world.
While the legacy of the hippies in countries like the US—from their rise to their fall—has been clearly documented and examined many times over, the question of how the subculture travelled far enough to seep into the lap of the Himalayas and spread its wings there is still one that intrigues. The hippies came to Nepal, that much is clear, and Jhochhen, or ‘Freak Street’ as it is often called, was their domain. But what exactly lured them here?
The alleys in Jhochhen today are bound by looming buildings of all sizes, and are often too narrow for too many to walk through shoulder to shoulder. At first glance, one doesn’t really see anything new, or even rather importantly old in Jhochhen; it is difficult to imagine that this was once the epicentre of the hippie movement in Nepal.
But, of course, look hard enough and you’ll find the signs, signs that the counterculture had indeed found a home in these shady streets at one point of time. A few metres into the alley on the left when you enter the Basantapur Durbar Square from New Road and you will see a lodge bearing a board that reads proudly: “Original since 1972”. Move further in and you can see hookah shops that date back almost half a century; these and other similar shops, experts claim, were a big part of the city’s appeal for the young foreigners back in the day. These small elements represent what Kathmandu has retained from the era of the hippies.
And then there are the people themselves. The sight of a long-haired elderly tourist passing through a Jhochhen alleyway in loose, strange-looking clothes, his tattooed chest on display, is a common one here even today, and look into one of the small cafés and chances are you’ll find dreadlocked foreigners tucking into their teas and smoking beedis (a thin, local cigarette made with leaves).