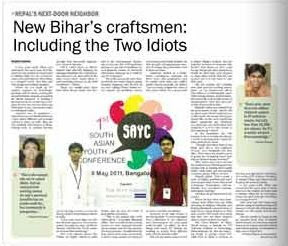 Where do you think an IIT (Indian Institute of Technology) graduate will be? Surely, working for a multinational company, or running the family business, or holding a governmental job, or starting a company of one’s own, or at an American University. If not, s/he would surely be making banks.

However, two IIT graduates – Manish Kumar and Shashank Kumar – have some different and unusual options to move on with. They are now working with farmers in Bihar, helping them in modern farming through their non-profit organization, Farms &  Farmers.

“We’re called idiots in Bihar,” Manish said, playfully slapping his colleague Shashank. By coincidence, this interview was also made in the same room where Aamir Khan is seen attending lectures in his 2009 blockbuster “3 Idiots.”

These two middle-class idiots from Bihar always thank their destiny for getting a chance to join IIT, the top-ranked engineering institute in India. “Every year, more than one million students appear in IIT entrance exams, but only less than 10,000 are chosen,” Manish said. “So it’s a matter of more than knowledge."


This is the obvious reason why IITians are highly valued in India and in the international community. Every year, 50% of IIT graduates manage to get full scholarships for post-graduate studies in American universities. Many go on to work for top US companies.

This is the reason why once Business Week, the world’s largest-selling business magazine, put the IITs on its cover, calling IITians “India’s hottest exports” and profiling a dozen IITians who are now the CEOs of giant global companies.


“This is the reason why we’re called idiots,” cofounder Shashank added. “But we realized that earning money for one’s personal benefits has no points until his/her community is prosperous.” He added that his state, taken as the worst one in India, is where many people are deprived of education and health facilities.

So they thought of beginning the journey of change from themselves and in their own state.

Shashank worked in a Delhi-based consultancy company for three years after graduation, and he earned more than one million Indian Rupees annually. He added, “You can easily imagine the value of that much money for a person like me from a middle class family.”

However, as he said, money is not the big deal. “It can be managed from somewhere if our willpower and determination for some good work are high.” He added, “As we’re doing well, many IIT alumni are sending us money from different parts of India and the world.”

But it is not always easy to work in Bihar’s villages. At times, they are ridiculed as losers or dropouts who flunked their finals, or who could not get decent jobs after graduation. People in Bihar have been cheated so many times before that they are cynical, and it is very hard to earn their trust.

The two Kumars also certainly miss their previous working atmosphere in air-conditioned offices since Bihar is so inhospitable, especially during summer, and the Splendor motorbike is their only means of transportation. They also never get to have their meals in time.


Manish’s father just retired from his government service, and he did not quite expect his IIT graduate son in this avatar. His dream of living his retired life on his son’s handsome salary apparently got shattered. Any grownup can understand how shameful it is to let this dream of one’s parents get ruined.

In the meantime, the two Kumars’ focus is to make this district a model in farming and to apply the same methods in others. “Though they labor hard in the fields, they fail to earn sufficient returns,” says Shashank and then asks, “Even when the market prices of goods are increasing every year, why are farmers always in crises?”

They don’t only teach farmers the modern ways of farming but also equally help in making their supply chain, retail chain and fast-moving consumer goods (FMCG) system. Manish added, “We’ve made a team of highly qualified and experienced personnel in the field of soil technology, horticulture, self-sustainable and need-based farming, and organic farming.” And they are all volunteers in the project.

The Chief Minister of Bihar, Nitesh Kumar, is himself an NIT (National Institute of Technology) Patna alumnus. So they are expecting things to change. Some 81% work force in Bihar is involved in farming, and agriculture contributes 42% to the GDP of Bihar. Therefore, to change Bihar’s agriculture should be given the utmost priority.

A few years back, Bihar was considered the worst state in India, and even the leaders in Nepal used to defame Bihar for its corruption, crime rates and what not. Now Bihar is a changed world.And, what and who bring such radical changes? Dedicated and well educated citizens like Shashank and Manish are the hands behind this change. And the youths in Nepal should get inspired from story of Manish and Shashank. It is time they stopped blaming the leaders and their system and started making contributions of their own in Nepal, too.

This appeared in print at THE WEEK, A Friday supplement of Republica, dated 15th of July, 2011
written by Admin at 10:32 PM