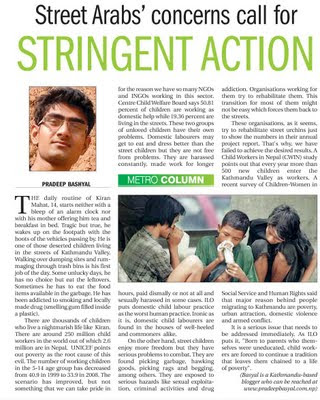 The daily routine of Kiran Mahat, 14, starts neither with a bleep of an alarm clock nor with his mother offering him tea and breakfast in bed. Tragic but true, he wakes up on the footpath with the hoots of the vehicles passing by. He is one of those deserted children living in the streets of Kathmandu Valley. Walking over dumping sites and rummaging through trash bins is his first job of the day. Some unlucky days, he has no choice but eat the leftovers. Sometimes he has to eat the food items available in the garbage. He has been addicted to smoking and locally made drug (smelling gum filled inside a plastic).

There are thousands of children who live a nightmarish life like  Kiran. There are around 250 million child workers in the world out of which 2.6 million are in Nepal.  UNICEF points out poverty as the root cause of this evil. The number of working children in the 5-14 age group has decreased from 40.9 in 1999 to 33.9 in 2008. The scenario has improved, but not something that we can take pride in for the reason we have so many NGOs and INGOs working in this sector. Centre Child Welfare Board says 50.81 percent of children are working as domestic help while 19.36 percent are living in the streets. These two groups of unloved children have their own problems. Domestic labourers may get to eat and dress better than the street children but they are not free from problems. They are harassed constantly, made work for longer hours, paid dismally or not at all and sexually harassed in some cases. ILO puts domestic child labour practice as the worst human practice. Ironic as it is, domestic child labourers are found in the houses of well-heeled and commoners  alike.

On the other hand, street children enjoy more freedom but they have serious problems to combat. They are found picking garbage, hawking goods, picking rags and begging, among others. They are exposed to serious hazards like sexual exploitation, criminal activities and drug addiction. Organisations working for them try to rehabilitate them. This transition for most of them might not be easy which forces them back to the streets.
These organisations, as it seems, try to rehabilitate street urchins just to show the numbers in their annual project report. That's why, we have failed to achieve the desired results. A Child Workers in Nepal (CWIN) study points out that every year more than 500 new children enter the Kathmandu Valley as workers. A recent survey of Children-Women in Social Service and Human Rights said that major reason behind people migrating to Kathmandu are poverty, urban attraction, domestic violence and armed conflict.
It is a serious issue that needs to be addressed immediately. As ILO puts it, "Born to parents who themselves were uneducated, child workers are forced to continue a tradition that leaves them chained to a life of poverty".
This appeared in print in the metro page of The Kathmandu Post dated 12th April, 2011. Chick here for e-paper view
written by Admin at 4:39 AM