He will be here, will play some of his best numbers and leave people screaming "once more ...once more". It's been a long wait but, the wait is about to bear the sweetest fruit for we shall witness a history, the largest concert in the Nepalese territory. The tickets are a bit higher but I can bet my whole money that nothing will keep his fans from watching Bryan Adams rock his fans to the core of their heart. Nevertheless, the venue might not do justice to his fan followings since its peewee capacity to hold just 25000 audiences.
However, his visit couldn’t go controversy-free. People are raising issues regarding his concert-is it in Nepal’s capacity to hold such an extravagant event? Further, some music activists are claiming that it is a direct encroachment over Nepali music in the name of publicity of NTY. Unlike what they think, I see his visit as a glimpse of a reality, the way we have been globalised. Like the inter-connected web pages we have grown interconnected to every aspect of the globe. Do we want to be bound by borders these days? 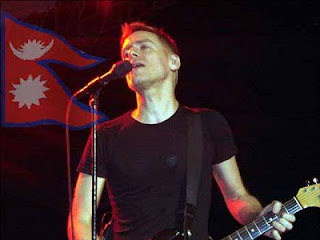 Shakira and Richard Marxperformed in India recently and their event mangers didn’t even consider placing one here in Nepal. So, how does it feel to “being a Nepali” ego-like not even being noticed? Many thanks to Bryan that he considered Nepal worth his performance. I hope this sets a trend and we get to see more and more stars perform here in Nepal. Actually, a positive message reverberates back in the global arena if these stars perform here. An ugly tag of “post-civil-war country” might get wiped away from our country’s name. Since he uses the video footage of his concerts in his music videos this might serve as an opportunity to be seen.

Time has totally changed everything. So, we are not only the citizens of any particular nation; we are also a global citizen. No sooner Steve Jobs releases Apple’s new product in the Silicon Valley, millions of gadgets freak want to own one for them. No matter our players participate or not Nepal gets divided into fragments to support their teams during World Cups. Every time sequels of Hollywood movies hit the theatres, we rush to cinemas. These are few examples how we are being a small part of the globalized world. No one can deny this phenomenon.
Our commitment is shaped by issues not by nationality. Such concerts show the taste of youths. I have due respect for Narayan Gopal, Fatteman, among others, and my ipod is also stuffed with their music. I love them but, it is about the taste and no one can manipulate our taste. There are many genre of music besides our traditional music. We must have equal compatibility with all them. If it is the competition that you fear, give us the music that would hypnotize us. Time is changing and you should learn to keep its track.
We should build bridges, not walls. And Adams visit creates one, a bridge to link east and west. It teaches us the boarder-lessness of music. Had our music been that popular among the westerners would we stop flying westwards to give concerts? No. So, why should we create issues when the water is flowing the other way around?
(Bryan Adams will be performing LIVE in Kathmandu (NEPAL) for 90 minutes in feb 19, 11)
written by Admin at 7:34 PM